7 of The Most Dangerous Snakes in Costa Rica

7 of The Most Dangerous Snakes in Costa Rica

It can be easy to end up lulled into a certain sense of complacency while enjoying the lush landscapes Costa Rica Offers. Colorful flowers, birds, verdant vegetation, pristine cascades—splendor and majesty abound. But there is a threat lurking in the rainforest that many, especially those not from the tropics, might forget.

As one of the most biodiverse regions on the planet, Costa Rica boasts vast collections of species: 850 different birds, nearly 2000 kinds of trees, and 23 species of venomous snakes. With all those danger-noodles potentially lurking in the shadows, how can we possibly feel at ease in the rainforest?

The answer is simple. We must arm ourselves with a healthy dose of snake-savvy knowledge!

First, let’s familiarize ourselves with our potential assailants. Below is a list of some of the most dangerous and common snakes in Costa Rica. Because only 15 percent of snakes in Costa Rica are venomous, it’s crucial to be able to tell these species from their more benign cousins. Thus, I’ve included possible lookalikes for some. 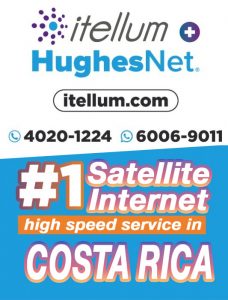 A member of the viper family, the fer-de-lance -- or terciopelo to locals, is considered the most dangerous snake in Costa Rica, not for the potency of its venom, but its ubiquity. Its high rate of reproduction and extensive range make it more likely to be encountered by casual hikers than other venomous species. Thus, terciopelo accounts for more life-threatening bites in Costa Rica than any other snake. 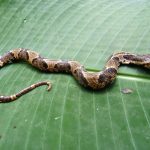 Named for its aesthetic similarity to the fer-de-lance, the false terciopelo bears a similar brown pattern. However, any snake-savvy hiker will recognize the falsie’s round pupils (vipers have vertical pupils) and smaller, less triangular heads. 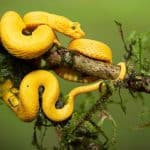 The tree-loving eyelash pit viper is another commonly encountered member of the viper family. With distinctive crests above the eye and striking colorations ranging from bright yellow to almost pink, it’s hard to mistake the palm pit for other non-viper snakes.

It is best to avoid all snakes that bear the distinctive triangular head and vertical pupils of the viper family. 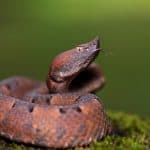 The hog-nosed pit viper is a small terrestrial viper that bears a resemblance to the eyelash pit viper. It may be found hiding in the fallen leaves of humid tropical forests.

Snakes like the hognose and terciopelo give a good reason for hikers to only use cleared and maintained trails, and to stick to the width of those trails at all times. 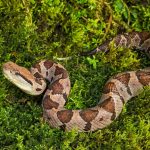 The Central American jumping pit viper is another terrestrial species that may be found in fallen leaves, between tree roots and in the dens of other animals. It has a broad body and head reminiscent of some North American rattlesnakes.

Contrary to what the name implies, jumping pit vipers cannot jettison themselves at invaders, but instead attack as any viper would: with a quick strike most commonly at ankle or calf height.

Get More Out of Costa Rica 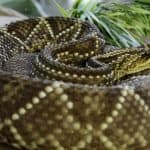 The Central American rattlesnake is found in drier areas, typically in the Guanacaste or northern Puntarenas provinces. While not uncommon, it prefers the edges of undisturbed forests and is not as likely to be seen as the fer-de-lance or other vipers.

However, the venom of the rattlesnake is second in potency only to the species listed below. 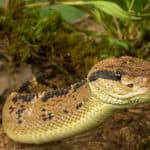 While much less common than the previously mentioned vipers, the large Central American bushmaster poses a substantial threat to humans due to its extremely potent venom. Victims of a bushmaster bite have just hours to receive medical attention before risking severe tissue damage, muscle loss, or death. Luckily, these snakes are nocturnal and seldom encountered. 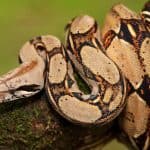 Boa constrictors are giant snakes with brown patterns that could be mistaken for any of the above species. However, boas have a distinct blocky-head shape that bears little resemblance to a viper’s triangular head.

Snakes in the boa family are constrictors and have no venom; thus, they pose little threat to humans. Boas should still be treated with respect, however, as their toothy bites can still cause damage.

While most of the dangerous species in Costa Rica are members of the viper family, there are also some elapid snakes -- the family that includes coral snakes as well as cobras and mambas -- that pose a significant threat. The two most commonly encountered members of this family are Allen’s coral snake and the Central American coral snake.

Allen’s coral snake may be found in the marshy jungle, though mostly at night. The Central American coral snake might be found in pastures and coffee plantations. Both species are highly poisonous.

Coral snakes’ vibrant coloration is a communication tactic. It says to would-be attackers, “stay away!” But, some non-venomous species mimic coral snake patterns to benefit from their danger-warding properties without supplying any of the firepowers.

Both the king snake (or coral falsa) and tropical milk snake bear similar patterns to the coral snakes above. However, in both cases, the familiar rhyme to differentiate the species holds true: Red touches yellow, kill a fellow—red touches black, safe for Jack.

Though it’s important to note that this rhyme does NOT apply to all coral snake look-alikes across the globe, and it is always best to avoid any snakes that bear similarity to venomous species.

While it’s good to have a healthy dose of respect and regard for snakes, dangerous or not, but, there is no reason to view Costa Rica’s venomous species as grounds for staying indoors. It is estimated that around 30 percent of all viper strikes are “dry,” meaning there is no venom in them.

Moreover, most snakes do not bite at all unless stepped on or otherwise threatened. Staying on well-maintained trails, using a wildlife guide, and wearing proper footwear are all ways to avoid dangerous snakes easily. In most cases, just the commotion of hikers will be enough to send dangerous snakes packing.

In areas where the above snakes are likely to be found, proper footwear can be a pair of mid-calf or knee-high boots. Unlike ankle-high hikers, thick rubber or leather boots ensure maximum protection for the entire strike region of your leg. NEVER hike in sandals or barefoot in tropical regions. And, always abide by the simple rule to give any form of wildlife a safe observation distance.

You can check the InCostaRica App for tour guides that can assist you in planning your next Wildlife Adventure. By using the App, you are also offered discounted prices.

Tropical paradise is not without its perils. Providing such a staggering assortment of life, Costa Rica does home species of all sorts that humans can find hard to live with. Despite this, following some simple guidelines and maintaining vigilance means it’s possible to live with deadly snakes in relative harmony.

Preparing for a Medical Emergency in Costa Rica

Buying A Gun in Costa Rica- 7 Step Guide – Can You Buy One?